A. Elmer Crowell (1862-1952) of East Harwich, Massachusetts, is known as one of the greatest decoy makers and bird carvers of all time. The lifelike quality of his three-dimensional portrayals of American wildfowl is unsurpassed.  He acquired his intimate understanding of avian anatomy and plumage patterns over the course of a lifetime spent observing and hunting Cape Cod’s abundant indigenous and migratory bird populations.

Before establishing his carving studio in 1912, he worked as a hunting guide, camp manager, market gunner, cranberry farmer, and exterminator.  Crowell was inspired to start his studio by the passage of the latest in a series of federal and state hunting laws aimed at bird conservation. He decided to focus fulltime on making decoys and decorative bird “models” for sale. Although Crowell had carved decoys for his own use since he was a teenager, and later for a “who’s who” of well-to-do patrons, he found a new market for his decoys and ornamental bird carvings in collectors and tourists who appreciated them as exquisite works of art.

The ten works showcased in this online exhibition have been selected from Shelburne Museum’s collection of more than 150 carvings, paintings, and drawings by Crowell. Most works were given to the Museum in 1966, by Mrs. Stuart M. Crocker in memory of her late husband, who was a lifelong friend of Crowell and a major collector of his ornamental birds. Each object was chosen because it either demonstrates his talents as a sculptor and painter or is a milestone in his artistic career.

For more information about A. Elmer Crowell please see:

Generous support for this exhibition is provided by The Donna and Marvin Schwartz Foundation. 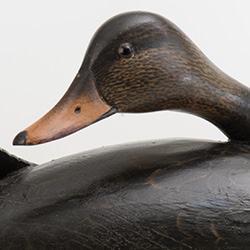 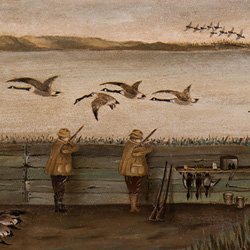 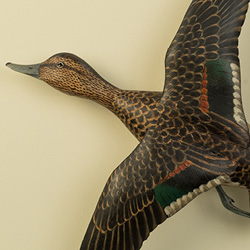 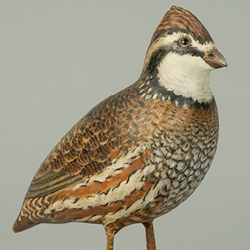 Inscribed on its base with the date 1894, this miniature Canada goose is the earliest documented example of ... [more] In some instances, it can be extremely difficult to distinguish between Crowell’s high-quality working decoys and his “ornamental” birds because of ... [more] Unlike the finely detailed feathering characteristic of Crowell’s decorative bird carvings, the painted plumage of the Canada goose located ... [more]

Based on the beauty of the expertly blended plumage of his decoys and decorative bird carvings, it is hard to believe that Crowell had minimal painting instruction. According to his friend and neighbor Dorthea Setzer, ... [more] This flying green-winged teal hen and mallard drake (below) are exquisite examples of Crowell’s unparalleled sculpting and painting skills. Based on a lifetime of field ... [more] Crowell used paper patterns such at these life-size greater yellowlegs to ensure consistency in the forms of his bird carvings and their painted feather decoration. He cut the templates out of ... [more] In her book The Art of the Decoy: American Bird Carvings (1962), Adele Earnest proclaimed that ... [more] This life-sized carved belted kingfisher is prominently featured below in the portrait of A. Elmer Crowell painted by artist Martha Crocker. Both are part of ... [more] Standing more than three-feet tall on wrought iron legs, this life-size immature great blue heron is the largest bird species A. Elmer Crowell ever carved. Only one other, nearly identical young heron is known to ... [more] The inscription written in blue ink on the underside of this bobwhite quail, indicates that it was “The last bird” to be made by Crowell and dated 1951. If true, this means the decoy was ... [more]