Following the “Stay home, Stay safe” directive, I’ve found myself thinking a lot about home and, given the current circumstance, safety. The topic of home protection has been an interest of mine for several years.

Museum founder Electra Havemeyer Webb had a penchant for collecting—this is, of course, not new news. However, one object that drew her attention time and time again was the witch ball. She used them to decorate the Brick House, her home in Shelburne, Vermont, displaying them in bowls. Years ago, witch balls were often hung in windows, an object known to ward off all things evil: witches, spirits, spells, or ill-will. Less interested in acquiring fragile glass balls, I turned to horseshoes to keep my home safe.

Are you superstitious?
The superstitious beliefs of colonial America were a result of a number of misconceptions and inexplicable phenomena, specifically unexplainable sickness or death; misfortune to the home, such as fire; or natural disasters, including earthquakes or floods.

At that time, an apotropaic device, or a technique with which to ward off evil, was essential to protecting the home. Apotropaic devices varied, but might have included horseshoes, witch bottles, witch balls, gargoyles, or concealed garments, including shoes. A number of apotropaic devices have been discovered throughout the New England region, dating from the colonial period to the 20th-century. These objects were deliberately placed into various areas of the home, including under floorboards, in the foundation, inside walls, ceilings, and roofs, or near the hearth or chimney. In addition, a number of the apotropaic devices also invited good luck, health, happiness, and fertility.

Saint Dunstan & the Devil
Horseshoes were among some of the first tutelary objects utilized to keep witches, demons, and evil spirits from entering the domestic space. They were generally found on or near the home’s doors. The legend of the horseshoe varies, but my favorite is the story of Saint Dunstan, an early medieval saint who served in many positions both religious and political. He also enjoyed painting and making instruments, and was a skilled blacksmith.

One day while working in his blacksmith shop, Dunstan was visited by a tired traveler. Dunstan was quick to recognize that this was nothing more than a guise—the two had encountered one another before—the traveler was the Devil. In this version of the horseshoe tale, the “traveler” asked Dunstan to put new horseshoes on his horse’s hooves. Dunstan continued by nailing a new shoe not to the hoof of the horse, but onto that of his visitor. Before agreeing to remove the nails, which were causing the Devil significant pain, Dunstan made him promise that he would never enter a house where a horseshoe was displayed above the door. The Devil obliged and, thus, the horseshoe became an object used to protect the home—the most notable of its powers being the repelling of the ill-willed and mischievous Devil.

The horseshoe, too, operates as a symbol of good luck and fortune. Many believe that by placing a horseshoe above the door with the ends pointed towards the sky, that it will catch and collect good luck for the home. If the horseshoe is placed with the ends pointing downward towards the ground, the good luck is collected in the horseshoe and dropped into the home when the door is opened. In either instance, the home and its inhabitants will gather its collected good fortune. 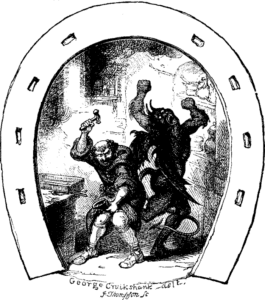 Images from the following text: The True Legend of St. Dunstan and the Devil: Showing how the Horse-shoe Came to be a Charm Against Witchcraft by Edward G. Flight with illustrations by George Cruikshank, engraved by John Thompson; London, Bell and Daldy, 1871.

Nowadays
Fascinated by apotropaic means of protecting my home, I decided to act on my new love of horseshoes. Today, there are four hanging throughout the house, one at each entry.

In the basement of my partner’s first house, a small, rusty horseshoe was nailed to one of the structural beams at the bottom of the stairs. When we relocated to Vermont, we left this special object installed. I believe that, over time, these objects become a part of the home—their original purpose remains the same as the property passes from family to family: keeping the home and its occupants safe.